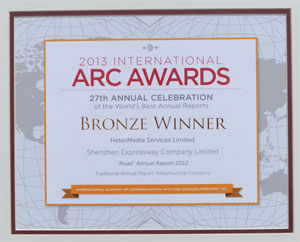 The Annual Report 2012 of Shenzhen Expressway won the Bronze in “2012 Traditional Annual Report: Infrastructure Company” of The 27th International ARC Awards, which hosted by MerComm, Inc.

The ARC Awards is a large event commending outstanding companies’ annual reports in the world. The judging is based on the values of creativity, clarity, effectiveness, and excellence as symbolized by the ARC Awards. Some of the elements to be considered in the judging of the annual reports include: cover design, president's letter, interior design, clarity of written text, presentation of corporate information, expression of financial data, and how well the spirit of the organization is communicated. According to different categories, the selection sets up gold award, silver award, bronze award and honorary award.